The HISTORY of CORNERSTONE BIBLE CHURCH

In 1930, a group of families seeking stronger Bible teaching broke off from Glendora Brethren Church and formed what was then known as the Independent Brethren Church of Glendora (IBCG).  For the first year, the new church met in a downtown Glendora building on the northwest corner of Glendora and Meda Avenues.

During that time, men from IBCG mined rock quarries in the mountains above the citrus farms of Glendora and brought down large stones out of which they built today’s current structure located on the northeast corner of Whitcomb and Michigan (now Glendora) Avenues.  In August of 1931, the new church celebrated its first formal meeting in the new building with Reverend William K. Conner presiding over the service.

For more than two decades the church thrived with a powerful ministry to families in the Glendora community.  Pastor Cecil Cline led the congregation for 17 years.  However, as California changed in the late 1950s and on into the 1960s, so too did Glendora, which became less of a farming community and more of a bedroom town for the new industries that were sprouting throughout the entire Los Angeles basin. As a result, the family farming structure that had been a basis for the city of Glendora and IBCG changed, and the church endured some challenging times.

Now known as Bible Brethren Church, in 1974 the congregation adopted membership in the Grace Brethren denomination seeking administrative, financial and pastoral support for a small congregation.  The following year, a youth pastor out of Whittier, Calif., Ken Churchill, accepted an assignment from the denomination to help rebuild Bible Brethren.  With the direction of the Holy Spirit, Churchill’s strong Bible teaching reached new community members.  During his nine-year ministry in Glendora, Churchill introduced “elder leadership” as the primary form of governing for the church, a structure that has served the church well for over 20 years.

In 1986, Dr. Don Shoff accepted a call to become the church’s new pastor.  He faithfully served God through continued clear and sound Bible teaching, and during his tenure the church experienced unmatched growth in its long history.  Pastor Don introduced numerous new ministries that met people in their different stages of life.  In the late 1980s, the church membership approved a change of names to Cornerstone Bible Church to more accurately reflect the independent status that it re-adopted in the mid-1980s.

Today the church continues to experience God’s blessing with growth and expanded ministries under the leadership of Pastor Bruce French, a longtime member of the church, who served as an associate pastor before being named Cornerstone’s senior pastor in 2003. 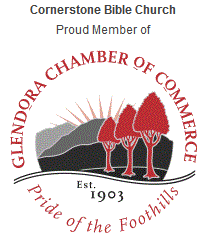